If you have never made your own Hot Cross Buns, then I implore you to give it a try. With the Great British Weather being somewhat changeable at present, as it is wont to do at this time of year, and with Easter fast approaching, what could be nicer than to shut yourself away in a warm kitchen and create something that is so delicious , and so rapidly and gratefully consumed that there will never be a need for them to go near a freezer! ( although they do freeze beautifully!) The taste difference between these buns, whose recipe follows, and the ghastly plastic-wrapped, chemically infused supermarket offerings has to be experienced at least once in your lifetime.

Quite the nicest recipe, as adapted a little by me, comes from my 1980 copy of Mrs Beeton’s Cookery and Household Management. And here it is.

1/2 a teaspoon of ground cinnamon

Reconstitute the dried yeast by whisking it in a small bowl or jug with the previously warmed milk and water and with the addition of one teaspoon of caster sugar to aid the fermentation process. This will take around 15 minutes at room temperature, and should produce a frothy liquid. Then put around 75 g or 3 oz of the flour into a large bowl. Add the frothy yeast mixture and whisk all together quite vigorously. Leave this mixture aside in a warm place for at least 20 minutes, or even for up to an hour if your kitchen is quite cold on account of the Wintry weather.

Next, sift the remaining flour , salt and spices into a large bowl, or the bowl of your kitchen mixer if you have one. Rub in the butter as if you were making pastry. Add the caster sugar and dried fruit, and mix well.

Beat the egg into the yeast mixture and then add this to the flour and fruit mixture in the large bowl. Mix all together quite vigorously for at least 5 minutes with either a wooden spoon, or using the dough hook on your appliance. The resultant dough should be really quite soft, but so well kneaded that it is no longer sticky and leaves the sides of the bowl clean. You may well want to add a little extra milk or water in the early stages of this process to help it achieve the necessary state of soft elasticity.

Cover the bowl with clingfilm and leave in a really warm place for around 1 to 2 hours, or until it has almost doubled in size.

Flour a large baking sheet, or 2 smaller ones. Heat the oven to 220c, or gas mark 7, or use the middle of your AGA top right oven.

Take out the risen dough, and knock it back on a floured work surface. Divide the dough into 12 to 14 even sized lumps, and gently form each one into a ball by folding the bottom in on itself. Try to cover any exposed fruit by rolling it under as otherwise it may scorch when baking. Put the dough balls on the sheet, leaving 1 inch or 2.5 cm gap between each one. Cover them with floured or oiled clingfilm and put them to rise somewhere warm. Whilst they are rising, you can make the crosses. This is best done by making a dough of strong flour and water, and kneading it well. Just as if you were making an unleavened flat bread, roll it out thinly on a work surface, and cut the requisite number of thin strips with which to make the crosses. Put a cross on each bun whilst they are in the process of rising, but do not make the crosses so large that they touch the baking tray, or they may stop the buns from growing satisfactorily. Keep the buns well covered, and they should be ready to bake when they have risen, 20 minutes to 1 hour later. Alternatively, you can forgo the task of making crosses, and , immediately before baking, just cut a cross in each bun with a razor or very sharp knife. This is quite acceptable, although your buns may be a little flatter and less domed as a result

Put the buns in the oven where they will take anything from 15 minutes to 20 minutes to bake. As they are cooking you can make the glaze. Do this by boiling the glaze ingredients together for 5 to 6 minutes.

As soon as the buns are cooked, and a lovely golden brown, take them out and brush them all over with the prepared glaze. 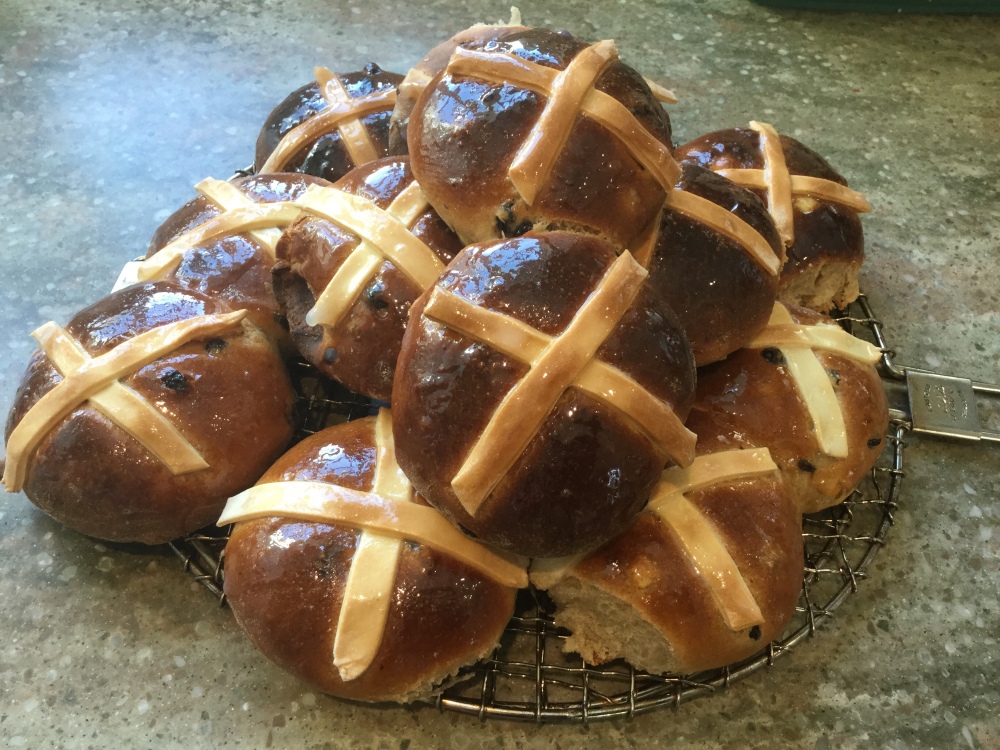